A work permit for Indonesia, also called a work visa, is a legal authorisation issued by the national government through the Regional Offices of the Ministry of Manpower allowing a non-citizen, in other words, a foreigner, to officially be employed by an Indonesian company.

A work visa in Indonesia can be for professional positions, such as manager, teacher, technician, and field executive. The Indonesian market is swamped by global corporations that regularly hire professionals who are foreign nationals, which makes work visa applications in Indonesia very common.

Locally referred to as KITAS, the work visa in Indonesia allows foreigners to fill in positions in Indonesian companies. A limited stay permit card can be exchanged for this visa within 14 days of the holder’s arrival.

Today, in an effort to encourage more foreign investors, the Indonesian government has simplified the procedure on work visa application for foreigners. For example, if previously IMTA was required, it is no longer the case.

Below are some of the important changes on work visa application in Indonesia.

Foreigners no longer need to apply for IMTA

Directors and commissioners that are also shareholders no longer need RPTKA

For further information on essentials about Indonesian work visa, read The Latest Presidential Regulation on Expatriate Placement Plan in Indonesia

Positions that can be Filled by Foreign Nationals

As previously mentioned, the Indonesian government is attempting to a more business-friendly environment for foreign investors. In addition to simplifying the work visa application process, the government has lifted some positions that were restricted for foreign nationals.

Some updates on the positions include the following:

People on contractual employment or who want to do business ventures in Indonesia will find the work permit useful. In addition,  English teachers looking for a career opportunity may apply for work visas for a career in Indonesia.

KITAS is valid for a whole year from the date of issue and an annual extension is possible. It can be be extended for five years in a row, as long as the sponsoring company remains the same. After five extensions, a work visa holder in Indonesia is eligible to apply for a permanent stay permit (KITAP).

If the visa holder leaves the country anytime in between, they will be required to show a re-entry permit at the time of departure. Such exits are subject to a duty charge by the FISKAL Indonesia department.

Processing of a work visa application in Indonesia takes approximately 30 days. An entire year of validity and the possibility of extension allows one to work in the country for five years at a stretch. The visa enables professionals from different walks of life to have official entry into the country for professional pursuits.

Throughout many years, Cekindo’s team of visa specialists has been assisting those in need of work visas in Indonesia. Let us handle the paperwork and deal with the immigration officers on your behalf.

Discuss your needs with us now by filling in the form below. 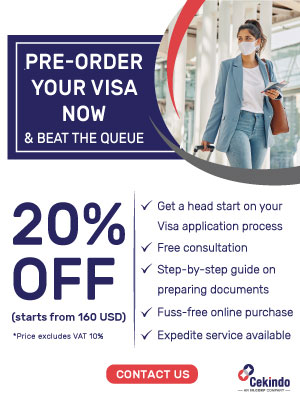