Skip to content
Table of Content
Indonesia’s technology and digital sector are experiencing a major spike in venture capital activities. there is no better time to run startups in Indonesia than now.

With more than 260 million of the population, Indonesia’s middle class is growing rapidly. Coupled with the affordable access to mobile devices, these factors are now shaping Indonesia into a fintech ecosystem, allowing many Indonesian startups to venture primarily into e-commerce and ride-hailing markets.

Read more: An Introduction on the FinTech Landscape in Indonesia

Beginning a journey as a startup in Indonesia is definitely not an easy feat.

While accessing updated and important information is limited, business startups in Indonesia still have to face challenging issues and come up with effective solutions.

This article will guide you, as an investor, to know what to consider when running a startup in Indonesia. To be as objective as possible, we included all the good and the bad. 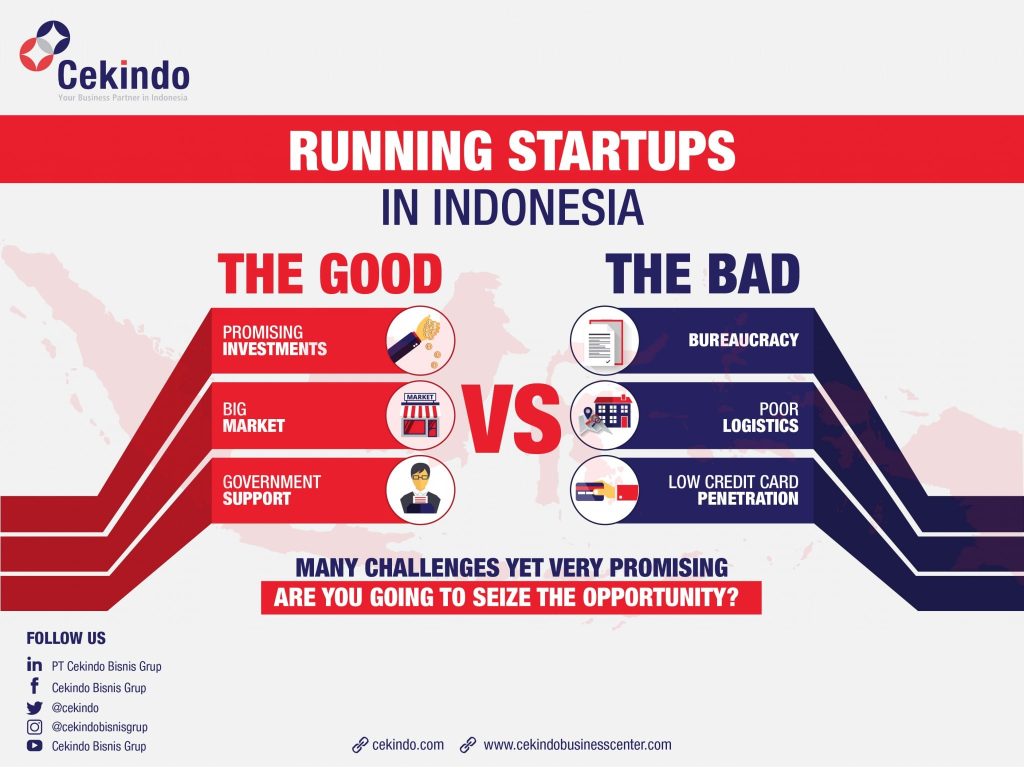 The Good of Running Startups in Indonesia

Indonesia has been known as the largest Southeast Asia online market. Since 2012, the country has successfully received the most venture capital deals from the emerging markets worldwide.

International giants such as Alibaba, Expedia, Alibaba, Tencent Holdings, and Rakuten Ventures, JD.id are pouring enormous investments into Indonesia, hoping to reap the most profits by grabbing a piece of this ever-growing pie.

In 2016, Indonesia has gained US$631 million disclosed venture capital, a massive growth as compared to the US$31 million in the previous year. The growth was even more shocking as the investment achieved US$3 billion deals in September 2017.

According to a study done in 50 countries by CB Insights, Indonesia has gained first place in the category of “startup frontier markets”. This category is defined as the “hotspots of raising venture capital (VC) outside of places where mainstream VC is concentrated.”

The capital city of Jakarta

In addition to that, Jakarta tops the rank of the top ten frontier startup cities, followed by Dubai, Vienna, Istanbul, Kuala Lumpur, and Bangkok.

On a larger global scale, approximately 60% of all VC deals are directed into US-based companies. The rest of the investments are primarily invested in the UK, China, India, Germany, and Canada.

Statistics have shown that in Southeast Asia, internet use is growing much faster as compared to other parts of the world. A study from Google also indicates that over the next five years, there will be whopping 124,000 users go online almost every day.

By 2025, Indonesia is anticipated to have an ecosystem that comprises more than 50 percent of all e-commerce markets in Southeast Asia with an estimated value of US$46 billion – thanks to the unique advancing mobile-first market.

As an avid supporter of technology and digital innovation, the influence of Indonesian President Joko Widodo does help to heighten this particular market. One of his plans in this burgeoning market includes the creation of 1,000 domestic tech startups by 2020, with a total value of US$10 billion.

The Bad and the Ugly of Startups in Indonesia

This might be shocking to other countries, but Indonesia is considered a highly unbanked nation with only a small percentage of its population owning a credit card.

With the increasing globalization, revolutionary technology, and evolving work patterns, Indonesia is now encountering huge challenges in terms of skills needs, and talents to keep up with workforce requirements, the International Labour Organization reported.

According to The World Bank, one of the factors that lead to skill and talent gaps is poor education. Inadequate education also causes people to be lack critical thinking skills is particularly crucial in order to run a startup in Indonesia.

Indonesia is ranked 72nd by the World Bank for the ease of doing a business (EDOB). Additionally, Indonesia is claimed by AFP as one of the countries in the world having a bad reputation for its startup bureaucracy.

As a result, this behavior makes adopting new and innovative ideas more challenging in the emerging markets in Indonesia.

Major cities like Jakarta and Bali have the most co-working spaces in Indonesia whereas this type of facility is scarce or almost non-existing in other regions of Indonesia. Thus it could be challenging for startups in Indonesia if the company is not located in one of the major cities.

Nonetheless, Indonesia is an absolutely alluring case. One would expect that foreign investors are not ready to venture into this challenging business environment.

The truth is, entrepreneurs, international giants, and foreign venture capitalists remain highly optimistic in Indonesian markets – because the tremendous opportunities are clear to see. They are just right in front of you.

The original article was published on Greenhouse’ blog

Starting a Construction Company in Indonesia: Know the Process

Question and Answer Related to Representative Office in Indonesia