A dormant company in Indonesia is a company that does not have any accounting transactions or any business activities for a long period of time. Dormant companies are inactive companies in accordance with Indonesian taxation laws and there are quite a lot of them in the country.

In other words, dormant companies are not allowed to carry on their business operations as they haven’t been conducting any business activities or accounting transactions for the past three years.

So how can a company become dormant in Indonesia? We will look into details in this post. 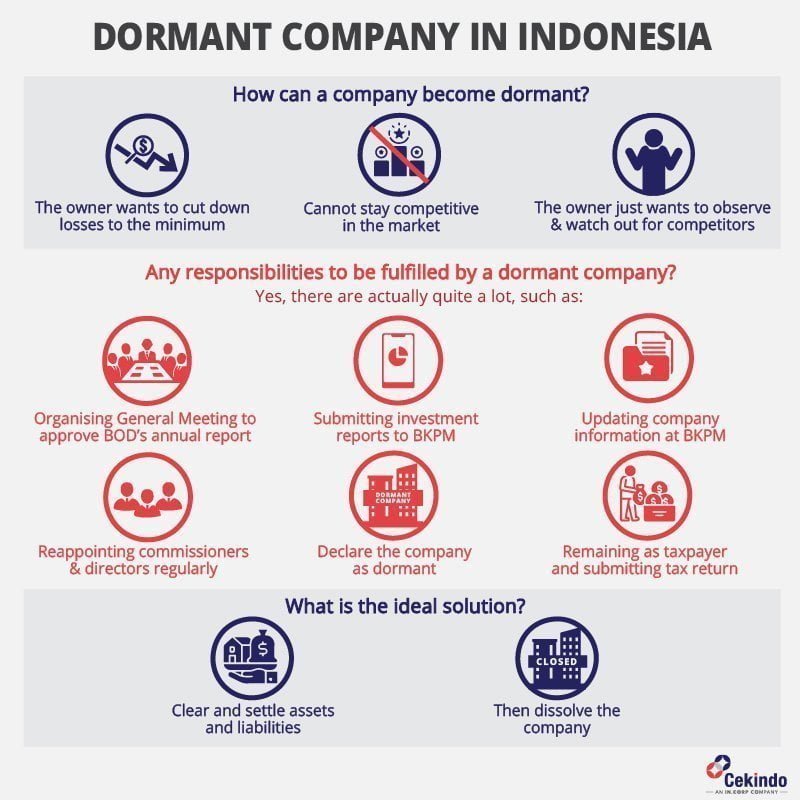 Reasons for a Company Becoming Dormant in Indonesia

Reasons that make business owners have their companies in a dormant status are plenty.

First of all, they may want to cut down the losses to the minimum due to the deteriorating market of their services or products. This is very common for companies who try to expand their markets too quickly and too aggressively without a solid strategy.

Secondly, some business owners would like to set up their companies first to get all the strategy ready before they start running their business. Sometimes, they just want to observe business activities and watch out for the competitors.

Last but not least, a company may be encountering losses and is getting ready to dissolve the company. However, before going ahead with the company dissolution in Indonesia, the company has to become dormant by halting all its operations, terminating employees and only remaining important tax reports.

There are definitely legal consequences for being a dormant company in Indonesia.

Being a dormant company is also one of the reasons that lead to company dissolution in Indonesia.

Dormant Company Still Has Its Responsibilities

There are obligations that a dormant company must perform in Indonesia.

There responsibilities are stated as follows:

All company dissolution in Indonesia for dormant companies must be done legally.

In a company dissolution in Indonesia, the process of liquidation means that the company clears and settles its assets and liabilities.

The process is performed by a liquidator or receiver, and this person has to be the Board of Directors or professional in the field appointed by the general shareholder’s meeting or the court.

How Cekindo can Assist in Dissolving a Dormant Company

Dissolving a company in Indonesia may appear to be challenging to many entrepreneurs, especially the foreign ones.

If unfortunately your company has to be dissolved, reach out to us so that we can provide complete assistance, from announcing on the newspaper until the completion of the dissolution process.

Fill in the form below for assistance.

Things You Need to Know Before Moving to Bali