The Free Trade Zone, known as an FTZ, has been discussed among investors, businesses, the government and the general community for the past few months.

In mid-2006, the heads of State of the Republic of Indonesia and Singapore met in Batam, Nongsa and agreed on a number of cooperative efforts, including the framework for economic cooperation investments.

On January 19, 2009, the President of Indonesia officially declared the Batam-Bintan-Karimun as a free trade zone or an FTZ. FTZ is a policy exempting facilities from some customs rules, including the taxes and levies. In this area, trade is governed by a wide range of regulations. Investors can use this route to establish businesses in the region. 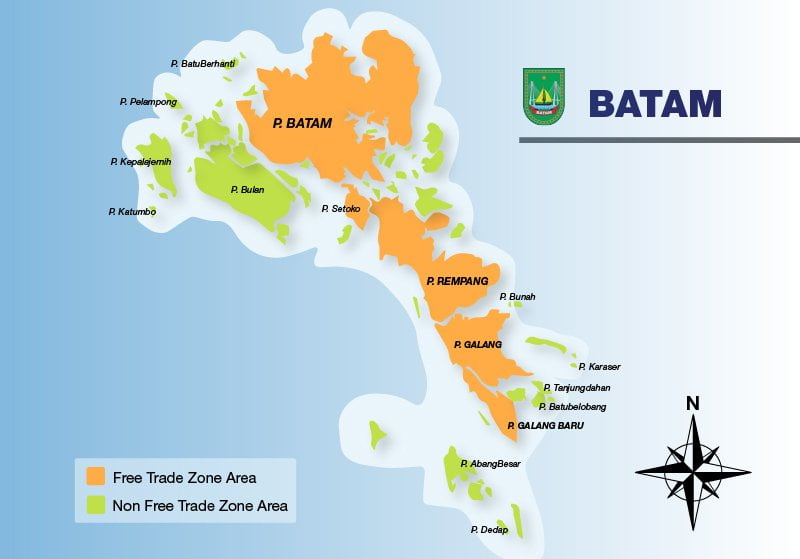 The advantages of setting up a business in Batam

Based on the benefits and opportunities of Batam FTZ mentioned above, investors might now seriously consider Batam.

As a newly-formed Free Trade Zone in a very strategic and promising area, there are many others investment opportunities waiting to be discovered.

Considering its advantageous and strategic maritime position, Batam island sees itself as a developing market for shipbuilding industries and has now become the largest shipbuilding site in Indonesia.

More than 150 shipbuilding companies have set up business there, including well-known multinational companies such as McDermott International, Drydocks World, and Keppel Corporation.

The industry was further boosted by the implementation of cabotage laws in Indonesian waters in 2011 that has fueled demand for local ships. Domestic shipping, in particular, has seen the Indonesian commercial fleet double in size from 2005 to 2013, from 6,041 vessels to 12,536 vessels.

The Batam, Bintan, and Karimun Island free trade zone, through its removal of taxes on imported ship parts that cannot yet be sourced domestically, stands out as the most advantageous location to set up shipbuilding operations.

It is not only a thriving domestic market but also a regional market that will soon to experience a rise in the trade as a result of the ASEAN’s upcoming economic integration.

Furthermore, Batam FTZ is also setting itself up as a promising place for the electronics manufacturing industry since there has been a constant growth in demand for electrical appliances and household audio/video equipment among Asian consumers.

This has encouraged major multinationals to increase their presence in the region. As such, Batam has attracted many electronic industry giants including Sanyo, Panasonic, Siemens, Philips and Sony to set up business in the region.

With the lure of a strong foundation of tech-driven consumers in nearby Singapore and China have been an incentive for setting up manufacturing operations in Batam, electronic goods producers now also profit from the rising purchasing power of Indonesian consumers.

As a growing free trade zone, which still seeks major developments in the future, Batam has begun to increase its infrastructure development.

To expect a successful FTZ to be competitive with other countries like Singapore or Malaysia, Batam will need to focus on its infrastructure development to support its growing status as an FTZ.

Consequently, there is considerable scope for international construction agencies to participate in opportunities for upcoming infrastructure projects.

This includes construction projects to build new roads, railways, bridges and transmission pipelines, not to mention other projects such as shipyards and international ports, or even airport rejuvenation.

As a Free Trade Zone, the island has many resources and investment opportunities in various fields. The FTZ in Batam is part of Indonesia’s economic development strategy to be able to interact productively on the regional and international economic scene.

Implementation of the FTZ is of national importance in enhancing the competitiveness of Indonesia’s economy amid the globalization of the world economy.

The FTZ system will have a positive effect, especially for the local area, with such improvements as the simplification of the bureaucratic system and the creation of jobs, as well as increased investment, the abolition of customs and export tariffs, increased foreign exchange and exports, and the enhanced economic growth of the community.

UPDATE: The government officially revoked the duty-free facilities for excisable goods in the free trade area and free port (KPBPB) or free trade zone (FTZ) in Batam, Bintan, Karimun, and Tanjung Pinang since 17 May 2019.

Start a Business in Batam with Cekindo

For more business possibilities in Batam or other big cities in Indonesia that you want to know more detail, feel free to contact Cekindo. Cekindo had helped many business entities in expanding and growing their businesses in Indonesia and Vietnam.

The Future of the Coal Power Plant Business in Indonesia