With current global condition, emerging market countries are the latest investment destinations, and Indonesia is no exception. If you are planning to open a business in Indonesia, you may know that the overall process can be quite a hassle due to bureaucratic and legal matters.

Once you’re finished with those matters, the next important thing is to understand the taxation system in Indonesia. Just like many countries, Indonesia operates a self-assessed taxation system that is divided into state and local taxes. Included in state taxes are income tax (corporate, individual, withholding), VAT (Value Added Tax), stamp duty and customs tax.

Local taxes are mainly related to commercial subjects such as property, vehicle, promotional and leisure activities. Because you want to start your business in Indonesia, you need to understand income tax properly. Generally, income tax system in Indonesia are applied both to individual and corporate. 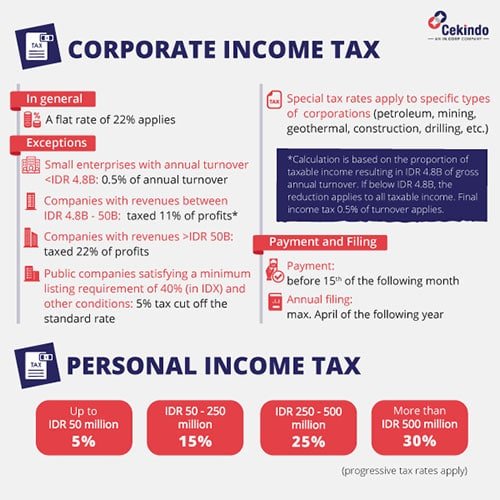 When it comes to corporate tax in Indonesia, the location where you establish your business is important because it will define whether you’ll be taxed as resident or non-resident company. Resident company is defined as company which is incorporated and conduct business activities in Indonesia.

Of course as a resident company, there would be plenty of benefits. For instance, when you do business in high priority sectors or in certain geographic areas, you could receive income tax relief. It also means that you would be eligible for a reduction in net income up to 30% of the amount invested, prorated at 5% for 6 years of production.

There would be also privilege for resident taxpayer (Indonesian citizen) for tax relief based on tax treaty between Indonesia and its treaty partner.

The corporate tax rate is generally flat at 25% (22% in 2020), but special conditions apply to a resident company. When your company is listed and meets certain conditions, you will receive 5% reduction. The best benefits are applicable to small businesses with a gross turnover <IDR 50 billion, which entitles them 50% off the standard tax rate. Based on government regulation number 46 of 2013, the company income tax rate will be as follows:

Besides, there is also special tax rates applied to specific business activities as lists on following table:

In the term of tax payment, as a resident company, you will have flexibility in your tax liability settlements. You can choose between direct payment to DGT (Director General of Tax), through third party withholding, or combination of both. As a non-resident company, it can only be done through witholding tax from source of income in Indonesia where you will be subject to 20% of various amounts.

While for non-resident taxpayers, are subject to final witholding tax of 20% on gross income but may be in lower rate under tax treaty. In term of tax payments, individual income tax is collected through third party witholding.

In Indonesia, payment for both corporate and individual tax liabilities are typically made to the State Treasury through a designated tax payment bank. Afterward, you must submit related tax forms to the tax office.

1) Any underpayment of tax must be settled before submitting the annual tax return.

2) Taxpayers can extend the period of submission of the annual income tax return for a maximum of two months by submitting notification to the Directorate General of Taxation.

3) Self-assessed VAT on utilization of intangible taxable goods and/or taxable services from offshore and VAT collected by VAT Collector other than State Treasurer is due by the 15th of the following month.

The 10% VAT on the sales price in Indonesia is actually the current VAT rate applied by the government. It may change because the government, by law, is allowed to amend the objective tax to a minimum 5% and a maximum 15%.

Moreover, if you want to import some products such as branded gadgets or shoes, be prepared to pay much more than you would in other countries because import duty rates could be up to 150% on the original sales price.

To find out more about taxation issues in Indonesia, kindly contact us by filling the form below.

Your Simple Guide to Starting a Tech Business in Singapore