Indonesia is a 17,000-island archipelago with an 81,000-kilometer coastline. The potential for aquaculture in the country is vast, especially when combined with a year-round warm, tropical climate. Though the country only uses 7.38% of its entire area for aquaculture, they are already one of the most prolific aquaculture producers in the world.

Indonesia’s fishing sector contributed 2.65% of the total GDP in 2019. It is also the world’s second-largest fish producer, with its tuna fisheries among the world’s largest and most yielding.

Opportunities in the aquaculture domain are still untapped, presenting a gap for foreign investors to explore Indonesia’s fishery sector.

The Current State of the Fishery Industry in Indonesia

Since 2015, Indonesia’s fishery sector has been unable to reach both production and export expectations. While fisheries provided roughly USD 4.1 billion in export profits in 2017, the World Bank estimates that efficient fishery management in Indonesia could lead to an annual profit of USD 3.3 billion within a decade.

In 2014, more than 80% of Indonesia’s fishing operations were still traditional home businesses run by fishermen that used limited technology. However, through the adequate transfer of knowledge and optimal aquaculture methods, Indonesia can further its status as one of the world’s top aquaculture nations.

To further boost the value of Indonesia’s fishing industry, the government plans to implement a fishery-specific management plan by 2022 known as Quota-Based Fishing.

This system separates fishery management regions into four zones based on the fishing sector. The commercial quota-dedicated Area 711, encompassing the Northern Natuna Sea, is included in the first zone. It has a fishing limit of 473,000 tons per year, worth around USD 911.67 million. 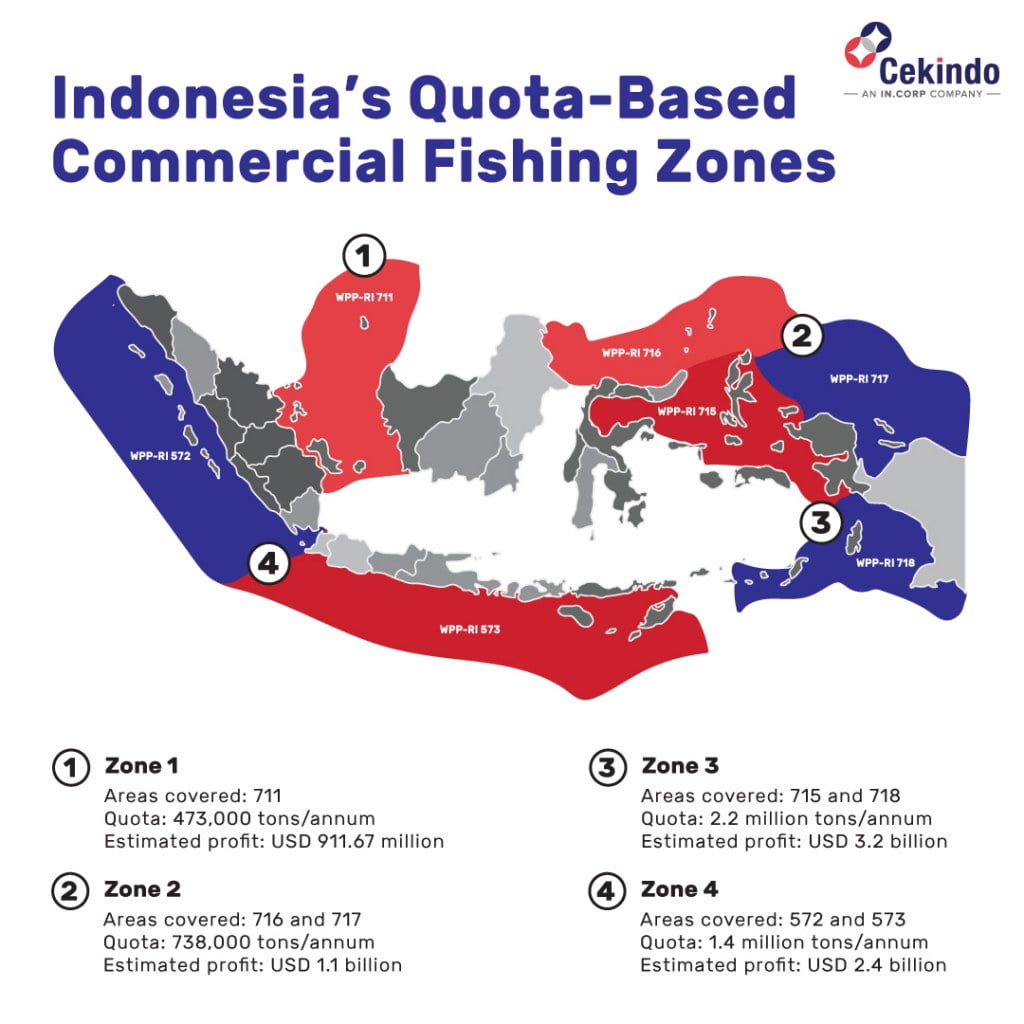 Areas 716 and 717 that stretch across Celebes and Halmahera Sea have also been brought together by the government as the second fishing zone. The yearly quota is set at 738,000 tons, with an estimated annual value of USD 1.1 billion.

The third industry zone – Areas 715 and 718, which encompass the Aru Sea – has the most potential of all zones. The quota amounts to 2.2 million tons of fish per year, worth USD 3.2 billion.

The fourth fishing zone includes Areas 572 and 573 (stretched across the Indian Ocean) and has a 1.4 million ton yearly fishing limit worth USD 2.4 billion per year.

How Can Foreign Investors Tap into the Fishery Industry in Indonesia?

The central government launched the Online Single Submission (OSS) system in July 2018, allowing firms in a variety of industries (including fisheries) to obtain essential business licenses and commercial permits effectively.

According to the OSS system operational or commercial permissions relating to the fishing sector include:

Foreign investors interested in aquaculture in Indonesia must first get a Recommendation for Fish Farming Investment (Rekomendasi Pembudidayaan Ikan Penanaman Modal, RPIPM) in addition to the aforementioned licenses and permissions.

Start Your Fishery Business in Indonesia with Cekindo

Investing in a fishery business in Indonesia consists of multiple procedures that are time-consuming and overly official. Having a company registration professional by your side can save you a great deal of time as well as provide a hassle-free experience. Cekindo provides a wide spectrum of ancillary services related to company registration, like legal consultancy, business license and other documents acquisition, tax and accounting, and HR services.

Start by filling out the form on the right and talking to one of our professional counselors.

Get to Know More about Copyright Law in Indonesia